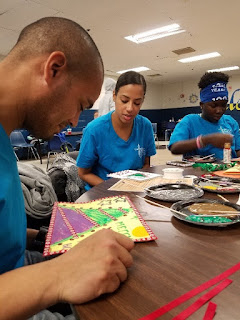 On November 18th, UpNext kicked off the holiday season by volunteering for Catholic Charities' National Family Volunteer Day! During this day, UpNext staff and fathers listened to holiday music and enjoyed morning treats before volunteering. As volunteering begins, we separated and joined projects at different tables. Some dads made Christmas cards while others filed boxes with care items. The goal for volunteer event was to making care packages with Christmas cards for the homeless populations in New York City, and hurricane victims in Puerto Rico. 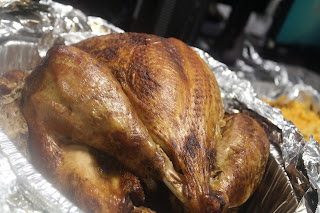 On November 21st, we hosted a Thanksgiving party to celebrate family and community at UpNext. Fathers and their families came to our office to enjoy warm potluck dishes, homemade by UpNext and Midtown Community Court staff. We also enjoyed a turkey donated by Chef Lucas Santos of Corner Cafe and Bakery (1645 3rd Ave). It was a wonderful gathering and reminder of our program's devotion to bringing people together. 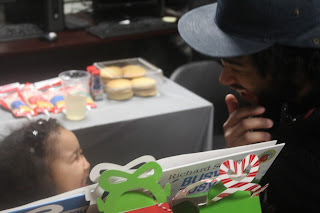 Finally, on December 20th, UpNext concluded the holiday celebration with a holiday and end of year party at Midtown Community Court. Dads and families played games, decorated cookies, and listened to classic holiday tunes. There was an ambiance of bonding, laughter and joy in our office among the UpNext family. Fathers also picked up gifts for their children donated by staff members at UpNext and the Midtown Community Court. Our holiday events symbolized the harmony and community which UpNext has spent this year trying to achieve.  We look forward to a productive and progressive new year. 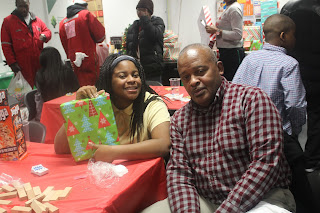 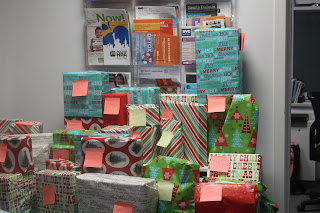 Healthy Masculinity and Fatherhood: UpNext at A CALL TO MEN Conference

On September 29th, UpNext, along with other social services organizations, joined the athletic and business communities at "A Call to Men: Your Influence, Your Platform," a conference focusing on raising awareness of healthy manhood/masculinity to decrease violence against women and girls. 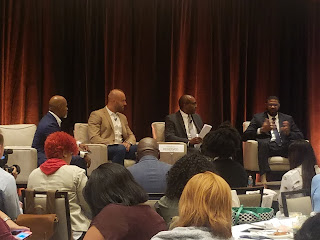 The conference began with New York Giants Linebacker Mark Herzlich spoke about the impact his college years and professional sport career had on his perception of manhood. He described gender equality and emotional vulnerability as essential steps in challenging sexual and domestic violence. The audience was captivated, and moved, by his words. As the conference continued, A Call To Men's CEO Tony Porter took the stage and presented the audience with a video of a male toddler receiving a flu shot while being encouraged by his father to "man up." This video illustrated that, even from boyhood,  men are encouraged to stay with a “Man Box” – a concept to describes the restrictive, socializing of men.
Mr. Porter proceeded to deconstruct manhood, expose the flaws it has, and introduce the idea of healthy masculinity, which is a form of manhood that encourages accountability and respect for women. The event concluded a panel discussion, featuring Mark Herzlich; Shan Foster, Senior Director of External Affairs, YMCA Nashville and Middle, TN; Ted Bunch, Chief Development Officer, A Call To Men; and Alan Gardner, Senior Vice Present, Human Resources, Verizon Communications. These men went on to talk about how they use their influence, and positions of power, to counter gender inequalities and mentor young men on healthy relationships.
The conference, a powerful and transformative event, highlighted topics that matter to UpNext: sexual and domestic violence, promoting healthy masculinity and relationships, and youth mentoring. The issues of masculinity presented at the conference are common within the population we serve, and it serves as a barrier to effective fatherhood. At UpNext, we challenge toxic masculinity and, with the tools provided by Call To Men Conference, we are better equipped to educate our fathers in healthy manhood.
Posted by UPNEXT at 2:53 PM

UpNext Connects with Uptown Schools to Increase Dad-Involvement in Schools

On July 11th, UpNext attended District 6 Summer Parent Academy's Community Resource Fair in Manhattan's Inwood/Washington Heights neighborhood. District 6 SPA aims provide parents with the resources needed to ensure their children’s academic and social growth. In their effort to connect parents to suitable services, District 6 SPA hosts a Community Resource Fair to bridge District 6 families and coordinators to service providers throughout New York City, including UpNext.
UpNext staff members exchanged ideas with other organizations on community engagement and met community members who are fathers, who knew a father(s) that would benefit from our support. The conversations between UpNext staff members and community residents revealed an interest in increasing fatherhood support programming in both schools and the greater community. We were happy to see such an ambiance of enthusiasm, motivation and positive energy during the Community Resources Fair. The event provided an opportunity for community members to become familiarized with UpNext, and, in turn, for UpNext to take a step closer in strengthening families through schools. We would like to thank District 6 Summer parent Academy for inviting us to the Community Resource Fair, and for their support of UpNext!

UpNext Celebrates Start of Summer with a Picnic! 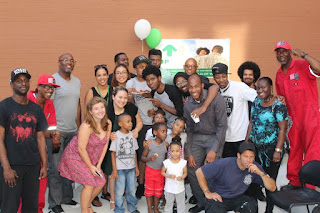 On June 22nd , UpNext kicked off the summer with a picnic potluck at the new outdoor courtyard at Midtown Community Court. On this hot sunny day, UpNext and Midtown staff gathered with UpNext Alumni dads and their children to enjoy delicious homemade dishes, listen to classic tunes.At the picnic, the atmosphere was lively. Some dads played board and card games, while others danced with their children to the music. The picnic was also a celebration of the accomplishments and milestones achieved by our dads throughout this programming year. We have witnessed many transformations and transitions, achieved through our dads’ hard work, dedication, and love for their children. Many of them have obtained full-time employment, reestablished or strengthened bonds with their children, and have also found success in other areas such as education and financial independence. While the road ahead for our fathers remains long, they have set a foundation that will enable them to reach greater heights.

At UpNext, we understand the crucial role education has in workforce readiness. We partner with Harlem Center for Education (HCE) to provide fathers access to vocational or higher education opportunities, aligned with their interests and goals. Every program cycle, a facilitator from Harlem Center for Education leads a workshop that covers educational options for non-traditional students. 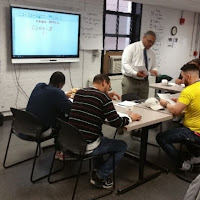 HCE workshops provide information on GED testing, college enrollment, and the benefits of higher education in the job market. The facilitator also reviews the difference between community colleges and 4-year colleges, and ways to explore both options as a working adult. The workshop also provides valuable information regarding financial aid, college credits, and certificate programs in college. 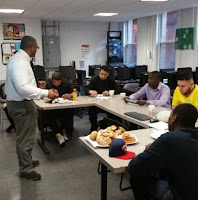 HCE’s  workshops present fathers with an opportunity to pursue higher education and increase employability through it. By the end of the workshop, many participants decide to return to school to incorporate education into their paths to success.

The  New York City of Department of Youth and Community Development’s Fatherhood Initiative partnered with The Mayor’s Office of Domestic Violence to bring fathers from its programs to attend a workshop on sexual violence. Members of New York City Healthy Relationship Training Academy, a training institute developed by the Mayor’s Office of Domestic Violence, facilitated the workshop. The workshop addressed issues around consent between partners and sexual and domestic violence. The fathers learned the importance of advocacy for sexual assault victims, and how awareness around these topics can build healthy relationships.

After UpNext fathers engaged fathers from other organizations. UpNext fathers used their experiences, and the lessons learned through the UpNext program to provide younger fathers with advice on manhood and fatherhood.

The day concluded with a march on City Hall, where our fathers held their posters high and shouted in support of sexual violence victims.

For more information on Denim Day and resources on sexual assault awareness visit: http://denimdayinfo.org/
Posted by UPNEXT at 3:56 PM 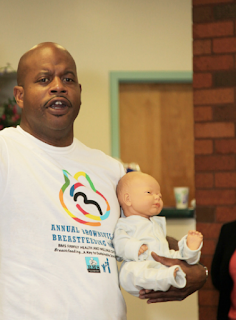 Since 2014, UpNext has partnered with the Breastfeeding Empowerment Zone (BFEZ), a program of New York City’s Department of Health and Mental Hygiene, to provide a workshop during every 6-week program cycle. The BFEZ workshop educates our participants on the importance of breastfeeding and its impact on the health and development of infants. Breastfeeding has many short and long-term health benefits for babies and mothers, including a reduction in infectious diseases and mortality during infancy, improved bonding, and maternal postpartum weight loss.

UpNext fathers participating in BFEZ workshops will also learn about the benefits of breastfeeding and how they can be supportive of their partner post-partum. The BFEZ facilitator also explains the barriers to breastfeeding- socioeconomic status, lack of education, cultural restrictions, etc.- and provides strategies on how to start or continue breastfeeding despite these barriers. The workshops conclude with a question and answer segment as well as time for discussion with the participating fathers.

BFEZ gives our fathers valuable resources to use so they can support the co-parent in breastfeeding. Understanding the importance of breastfeeding will help our dads strengthen their approach to health and parenting.

The Brooklyn Breastfeeding Empowerment Zone is a community-based initiative to make breastfeeding the norm North/ Central Brooklyn. Male partners play a critical role in infant feeding decision-making. By providing opportunities for peer-to-peer mentoring, the BFEZ helps males in the community take an active role in creating a breastfeeding-friendly environment for families. The BFEZ is funded by the W.K. Kellogg Foundation and is part of the New York City Department of Health and Mental Hygiene’s Brooklyn Neighborhood Health Action Center.


We thank Breastfeeding Empowerment Zone for their partnership and look forward to more of their programming!
Posted by UPNEXT at 4:00 PM